You Need To Know: BESSIE STRINGFIELD, THE QUEEN OF MOTORCYCLES

This born legend is someone everyone needs to know, in fact there is talk about making her life into a much deserved movie. After you read this you will agree with that BESSIE STRINGFIELD is truly an inspiration for everyone regardless of gender.

Bessie was born in Jamaica in 1911 and came to America and became an orphan at age 5, but this was a card that was dealt to Bessie made her strong willed. Fortunately she was taken in by an Irish woman that gave Bessie a centered spirit in God and determination to strive for what she wanted as long as she asked God for it. At the age of 16 this born rider that had never ridden a bike asked the Irish woman to give her a motorcycle which was a 1928 Indian which she didn't know how to operate but miraculously learned by herself that day. Now that is amazing but her Irish caretaker said that it was God that blessed her to be a motorcyclist... and a purpose. 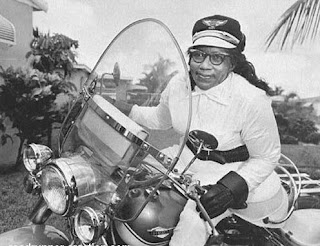 At the age of 19, Bessie was a great seasoned rider and that's when she began to become a legend. She would toss a penny in the air and when it landed on the map she knew where she was going to go and this was at the height racism at it's most ignorant and ugliest. This cruel stupidity would not stop her from going where she wanted and when she wanted. She would go from state to state staying with black families. Back then blacks in America were tight and trusting. She even stated that she would stay with families and get a place to sleep and eat for free because of the love black families had amongst each other. If she couldn't find a loving black family this didn't stop her, so she would simply pull into a service station and roll up her jacket and use it as a makeshift pillow and rest her body on the bike. From the 1930's through the 40's she had completed 8... EIGHT SOLO TRIPS ACROSS THE UNITED STATES and once again this during the height of racist stupidity. She soon became a inspiration for other female riders regardless of color and an instrument of determination for African-Americans... and like a legend she stated she was just living her life. 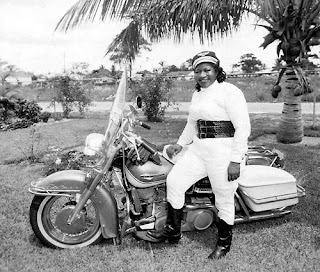 During her riding in the early part of life she had married and divorced six men. She was a very strong independent woman and stayed that way. Soon World War II came and she volunteered to become a motorcycle dispatcher on her Harley Davidson 61 which carried secret-viable government documents from base to base. During one of her travels an idiotic bigot ran her off the rode but all she did was dust off and keep riding as the only woman rider in her unit.
In the 1950's Bessie went to Miami live her life and continue doing what she did best... something legendary. Bessie became a registered nurse and bought her own house too, but after work that's when she lived her real life as the organizer and founder of the Iron Horse Motorcycle Club... but disguised as as a man. She revealed her identity after she won a big motorcycle race in Miami beating every man. Once she showed everyone she was a woman she was denied the prize money by sexist idiots that couldn't conceive a woman beating inferior men that were not as good as she was. Once she showed everyone that she was the real thing, everyone gave her the respect she deserved and not only that she attracted press from all over that called her the "Negro Motorcycle Queen" and later the undisputed "Motorcycle Queen of Miami." She later became a stunt rider as well... imagine the first Jason Britton or Wink 1100 was a woman. 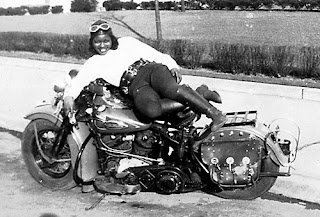 When all was said an done Bessie has owned 27 Harley, completed over 8 tours across America, became an accomplished stunt rider, racer, Army Motorcycle dispatcher, prominent figure in motorcycling, great image for women and African-Americans to prove ignorance and most of all a LEGEND. In 1993 this legend passed away from complications from having a big heart which she and everyone stated was ironic. She did have a big beautiful heart that never stopped her from doing what she loved to do which was riding even when the doctor told she shouldn't ride. She told him if I don't ride I don't live so I can't stop... I am honored to have written about this legend and will make sure to let everyone know about this great rider. Everyone twist the throttle for legend BESSIE STRINGFIELD.
at 12:16 PM

Thank you for writing this article about the lovely Bessie Stringfield. What an incredible woman.

Thank you for your efforts in putting this fantastic blog together. I recently became interested in motorcycles (classic bobbers and choppers). I went searching for a representation of "me" in the vast sea of cyclists and found your blog. Who are you man?

Even if you never write another post, I remain grateful for finding this campground along my journey. So far I've read every article and watched the Easy Rider video. Speaking of which, ARE YOU KIDDING ME!!! I never knew...Who knew...You did. Thank you and godspeed.

What ever happenned to Iron Horse Motorcycle Club that Bessie Stringfield founded?

Excellent! I had no idea of this woman and never would had you not shared her story. Thank you!

I had never heard of her before this article. Thank you so much for sharing. What an amazing inspiration!

Here's the key... take the ride.
The Onyx Rider is not a person. The Onyx Rider is your favorite bike in all black. It's that lean CHOPPER, that mean KNUCKLEHEAD, that smooth BAGGER, that road hugging CRUISER, that wild PANHEAD, that crazy-sexy SPORTSBIKE or that bad STREETFIGHTER that you have to ride... on a much needed ride, into the world of the Afro-motorcyclist. All are welcomed to take the ride no matter who you are. This is a much needed ride because the stories, lifstyle and contributions of the Afro-motorcyclist are scattered and unknown until now. Fianlly a central area to find everything about black motorcyclist from around the world. SO!!! TWIST THE THROTTLE AND STEP INTO GEAR. HOLD ON TIGHT, IT'S GONNA BE A FAST RIDE.

RIDER OF THE DAY QUESTIONNAIRE

Welcome fellow riders. It would be an honor for me to post YOU as a RIDER OF THE DAY, but in order to have a rider I'll ask you to do two things...

1st: Fill out the Rider of The Day Questionnaire and attach it to an e-mail with picture(s) of you and your bike.

2nd: Send the e-mail to onyxrider@gmail.com and that's it.

LET'S MAKE HISTORY!!! I WANT TO GET AS MANY AFRO-MOTORCYCLIST AS POSSIBLE.